[Sadly, a case of the scraplets got in the way of Nightbeat continuing this diary. My apologies to you, dear reader. ] 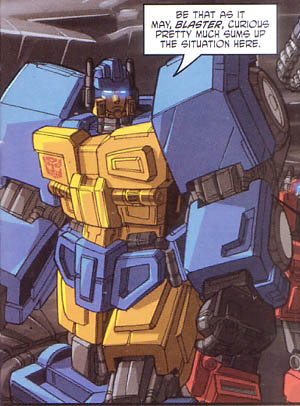 While hunting for a missing bot named Air-Ess, I have chanced upon an anonymous forum posting indicating a new wave of Cybertonians are arriving in 150 cycles. Information is low and I will need to investigate, though the streets are low on gossip. My usual sources are curiously distracted, though some have been muttering about Tight-Hans. Sounds like a henchbot of some kind.

Via an over-talkative shopkeeper source, I have received confirmation of the forthcoming arrival of a new Wave of Cybertronians. Hushed whispers talk of Titans, Wreckers, and Stratagems. Old rusty himself, Sergeant Kup, is spoken of, as is, must be compensating for something, Fortress Maximus.

A newsspeaker has leaked further information:

The timing is odd, are the shopkeeper and the newsspeaker working together? I must keep my eye on them.

I have deduced that there will be 46 Cybertronians. Will one be the missing Air-Ess?

A mole on the inside of the wave deployment authority indicates there will be an announcement tomorrow.

The announcement was made by the authority's usual humanoid facsimile. Presumably it is trustworthy, though you have to be a little paranoid with these facsimiles. You never know when they will turn out to be a hologram. Said announcement stated:

It also leaked more information, providing the identity of another member of the Wave:

Frankly, a lot of that seems like incomprehensible gibberish. I'll deduce the pattern in time.

There's much chatter on the street, but my usual sources seem to be lost in speculation. I haven't yet been able to identify the number of Titan Master's arriving, or if they will even have equal numbers of Heads and Bodies. A source has identified that Stratagem card backs will be artistic rather than a standard look as with battle cards. The mole has leaked that booster units of Titan Masters will not contain Heads and Bodies that typically go together. This sounds like typical deployment authority inefficiencies at play; perhaps they think this is a game?

"I always find that separating heads and bodies is easy; keeping track of which one went with which, not so easy, yes?"

Cosmos is such a show off.

Sometimes when there's a puzzle to be solved, I find the best thing to do is to get your head down and do some thinking. I was patrolling the usual route, past the usual dives and hustlers. My wheels know the way better than I do. Something big is going on, I'm thinking, I can sense it. The puzzles I've been fed so far are the tip of the iceberg, to use the Earth expression. A useful expression - our climate on Cybertron was so controlled I don't know what analogy I would refer to. All I can think is tip of the city sized Titan hiding in plain sight; but that's hardly going to catch on. Though we all know where we were when Metroplex and Trypticon decided to get up and have a go at each other. Millions of years of repression between those two; I'd recommend they get themselves some counselling, but Metroplex would get all quiet, then Trypticon would eat the therapist.

So there I was, letting my wheels do the moving while I travelled the pathways of this puzzle in my mind. Snippets of information are appearing on the street, someone is leaking them like a can of bad oil, but the leaks are coming from different sources. Who is the mastermind behind this? Why are these secrets being kept? Whoever it is, the street is livelier than it's been for a good few quartexes. Quartexi? Quarti? Possibly I should have paid less attention to the grooves on the grammarbot's ankles when I'd just been constructed; they were indicative of fluid retention from bad energon, possibly smuggled. Quartexes it is, of which a few have passed since the street was this lively. I passed through the local branch of Maccadam's to oil up the creative juices. A sozzled bot there was grumbling at the lack of Mercenaries in the new wave deployment. Another leak. I kept on moving, and thinking.

Next thing I knew I'd wandered into some kind of street party. Which was weird; my usual route definitely doesn't usually have a party. I think. Surely I would have noticed? I mean, yes I only noticed it because I almost ran into a gleefully happy humanoid muttering that a tidal wave was coming; however I'm pretty sure I still would have noticed a party (and why were they happy? We lack tides on Cybertron, but I don't think a surprise tidal wave deploying in front of you would be a good thing). There was talk of a combiner coming, and a deployer. Frankly both combiners and deployers are bizarre. I'm not sure we need more of either. I tried to interrogate said recumbent on the source of the information, but it babbled about hearing this from Arcana (4 Star). I pointed out Arcana was back on Cybertron, but it said "Not for long, he's sailing here!" and collapsed into laughter. Or possibly crying; it's hard to tell sometimes with the locals. Suffice to say I have more rumours to contend with, and the possibility that Arcana has developed galaxy spanning telepathy. Hard to find out - Arcana gets so defensive when I start asking questions.

I decided the human may have passed its best before date and kept on moving. Thinking my way through this puzzle.

Follow up is important. I hunted down the happy humanoid and got better details out of it. Tidal Wave is on his way. Ugh - Earth is definitely better without that sweary mouthed Metroplex wannabe. It doesn't sound like his head Fathom will be here, though even when Fathom is around you're unlikely to notice. Tidal Wave being here sounds like a boon to the microcons; I already hear that Nightflight is excited. Deducing between the lines, this suggests a 4 Star Decepticon Tank, Truck, and Helicopter will also be attending. One option is Bruticus, possibly to make Tidal Wave seem like the scholar of the two. It would be odd as it would make Onslaught a 9 Star rather than Bruticus being made of 5 Stars, but that seems feasible. Another possibility might be the Military Patrol, two tanks, a helicopter and a Growl oft times looks Truck like; though only two would be 4 Stars which doesn't fit all of Tidal Wave's needs. It's a conundrum wrapped in a fourteen story moron.

Using technology I stole from an Insecticon I have successfully eavesdropped on some humanoids talking with the deployment wave authority. Well, technically I taped a bigger antenna to a permanently KO'd Insecticon and managed to hide it in a return envelope for their online business selling fan cards of us glorious Cybertronians. Here's what I've deduced:

I noticed that my bug seemed to cause trouble with their communication quality; I hope they don't find it.

"Of course there are more heads than bodies; I'm good at my job. Better than you are at finding bugs my little mechanoid. "

I thought that was my work for the day done, then a scoop landed in my lap like an extinction event causing meteor. By which I mean it was taped to a brick somebot threw at me. Said scoop is Jurassic Strike - a Stratagem for Volcanicus, Fiery Champion. Or as he's more typically called, "Volcanicus, why be a Dinobot-Dolt, when you can be five Dinobot-Dolts at once". Seriously. Sometimes we have to check he still remembers how to burn energon.

This Stratagem is what Volcanicus has always wanted - a chance to make an enormous attack. Not a great shock, if you asked Volcanicus for his entire wish list, it's the word Attack over and over again. Is it what he needs though?